It’s been awhile since I updated my kid’s condition since forever ago (as seen in this initial post). I want to get back to the world of posting so I can talk about my 3 kids and especially with Milo and Matilda with their vision impairment and hearing impairment. I want to do it not because I need people to know all about them but because this is an easy way for me to reach out to families like us or similar to us so we can learn from one another.

Let’s talk about Matilda. Matilda was born with congenital microtia & atresia. She has unilateral hearing on her right ear and conductive hearing loss on her left ear. She has been wearing her Bone Anchored Hearing Aid (BAHA) since it was recommended when she was around 2 years old. We were told from early on that Matilda is an excellent candidate for a rib cartilage graft surgical reconstruction. 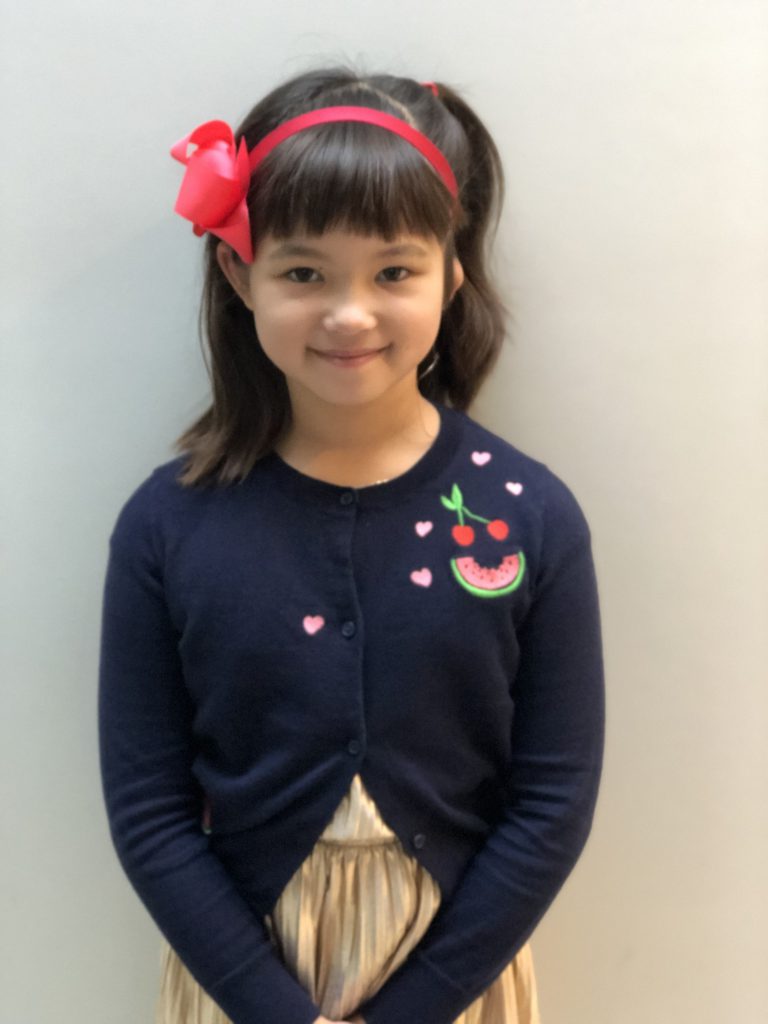 Last year her microtia team recommended that Matilda is physically ready for the surgery and we agreed to have the first of her three part surgery this summer. We planned our summer schedule so that she would have the surgery right at the beginning of the summer to allow time to heal and time to play before school resumes. She had her CT scan early spring and due to some unusual finding a MRI was performed as well. We were told that she has double ear canal and there was a mass (they suspected to be a teratoma) that needs to be removed. Luckily, the team of doctors were able to come up with a plan where they could do both the procedures at the same time with just one cut. We were warned that the mass was close to her facial nerve and there was a chance they might not be able to remove all of it. 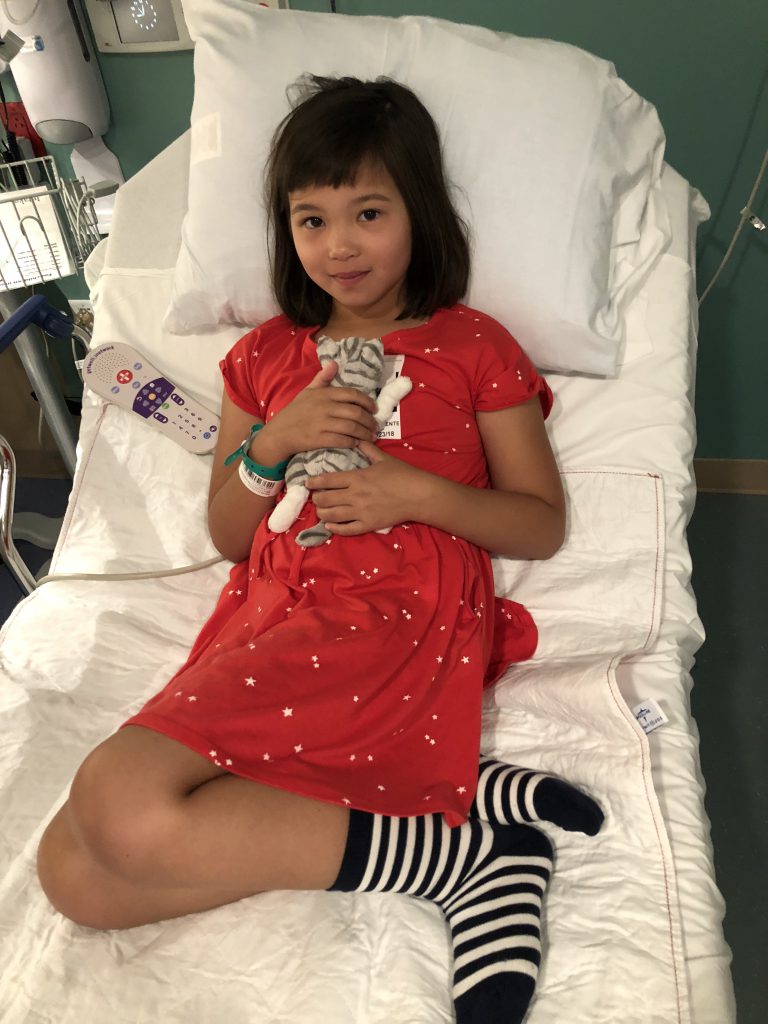 On the long awaited day of her surgery we were reminded it was at least a 10 hour surgery but we would be updated every few hours. The plan was to first remove the mass and if that goes smoothly they will start the reconstructive surgery; but the mass itself could take up to 10 hours to remove. We went home to start the very long slow wait and I started cleaning right away since it was hard to do any work that required concentration. It was about 3 hours later we got a call from the hospital that everything was going well and stage one was completed and they were moving on to the next step. My husband and I felt relived and we assumed they meant they took out the mass and going to start the reconstructive part. I quickly texted my parents and I decided to take a shower before we head back to the hospital. Shortly after that, we got another call from the hospital asking us to return to the waiting area because the surgeons want to speak with us. We were confused since we were just told by another person that they were moving on to the next step. We rushed out of the house and anxiously wondering why the 10+ hours surgery was over.

My husband and I were placed in a consultation room to wait for the surgeons to come talk with us. At that moment, I was experiencing all the flashback of doctors telling us about Milo with all his medical conditions. My husband and I did not have time to express our fears to one another but I know each of us were thinking of our own.

When the doctors walked into the room I knew they were going to tell us something that was not so good based on their expressions and careful caring voices. The doctors informed us that during their surgery as they were starting to remove the suspected mass, the facial nerve sensors all went off and they found something called the facial nerve schwannoma. The two surgeons said it is a very rare tumor (they have never seen one in all their years of practice) and what is more rare is that it is almost exclusive on an adult and not on a child. Luckily they were able to call for a specialist in this specific type of tumor and when he took a look at Matilda’s tumor, he was very excited. At that moment it somehow gave me a feeling of relief because it brought me back to doctors informing us of Milo’s conditions and that gave me a sense of security because I can relate that one adjective to this new unexpected information we were told. It is strange; but at that moment I have nothing to relate to.

The surgeons told us because of the location of her tumor, a biopsy can never be done because it would touch her facial nerve and that would cause permanent damage. Removing the tumor will also touch her facial nerve which would result in facial nerve paralysis. We were also told she can never have her inner ear surgery (this is the one where they would open up her ear canal to allow possible sound in to give her some hearing). She can also never have an abutment placed under her scalp so that she can have another option for her current hearing aid (this one would allow her to attach her hearing device onto a magnet place under her scalp so she does not have to wear her soft band); the reason is because she will have to get a life time of MRI to monitor the growth of her tumor. 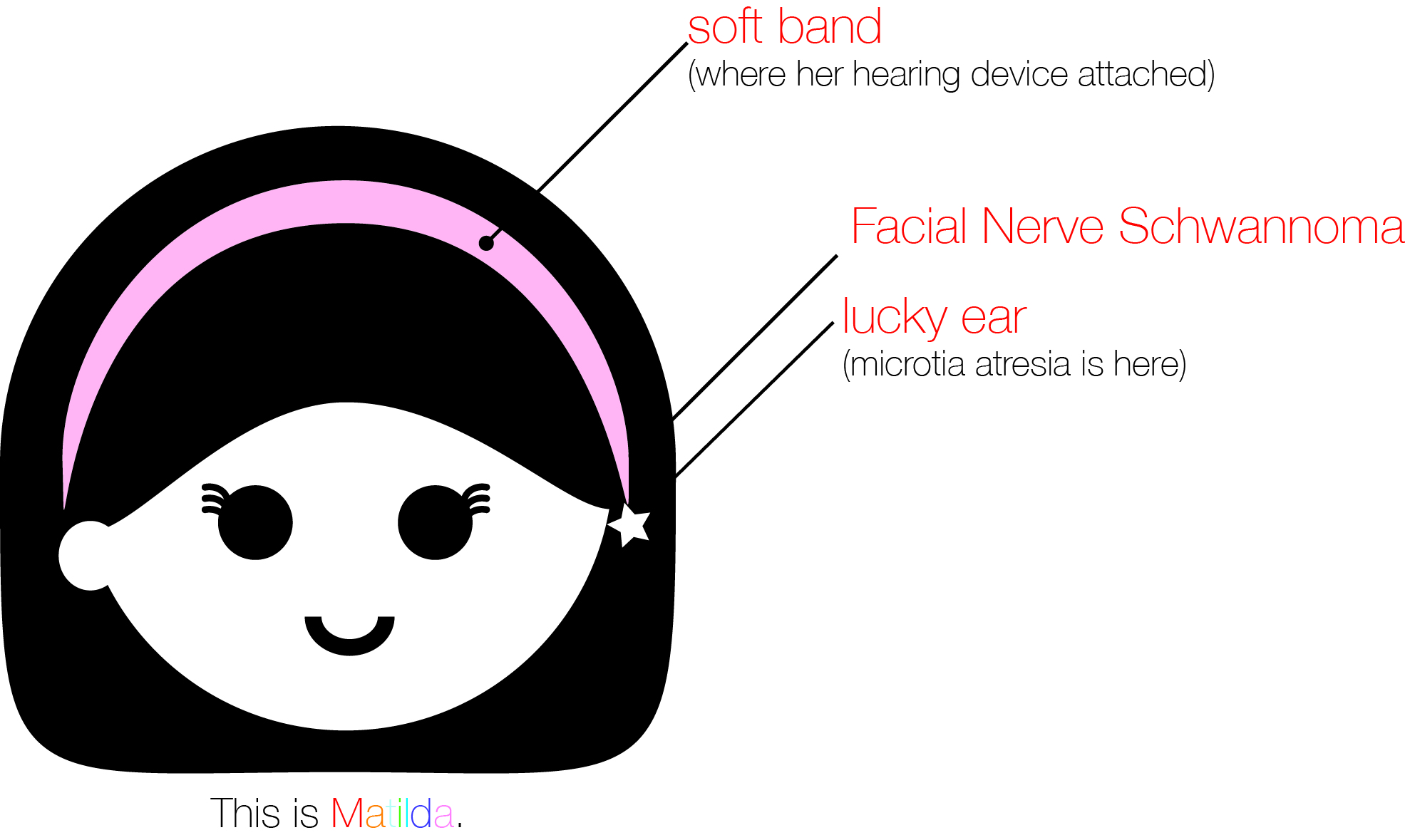 Her reconstructive surgery was put on a hold and that was why her 10+ hours surgery was over in 3 hours. It was a lot of information taken in, unexpected and for a truly surprising reason. My husband and I told the surgeons we never thought Matilda would fall into the category of Milo. 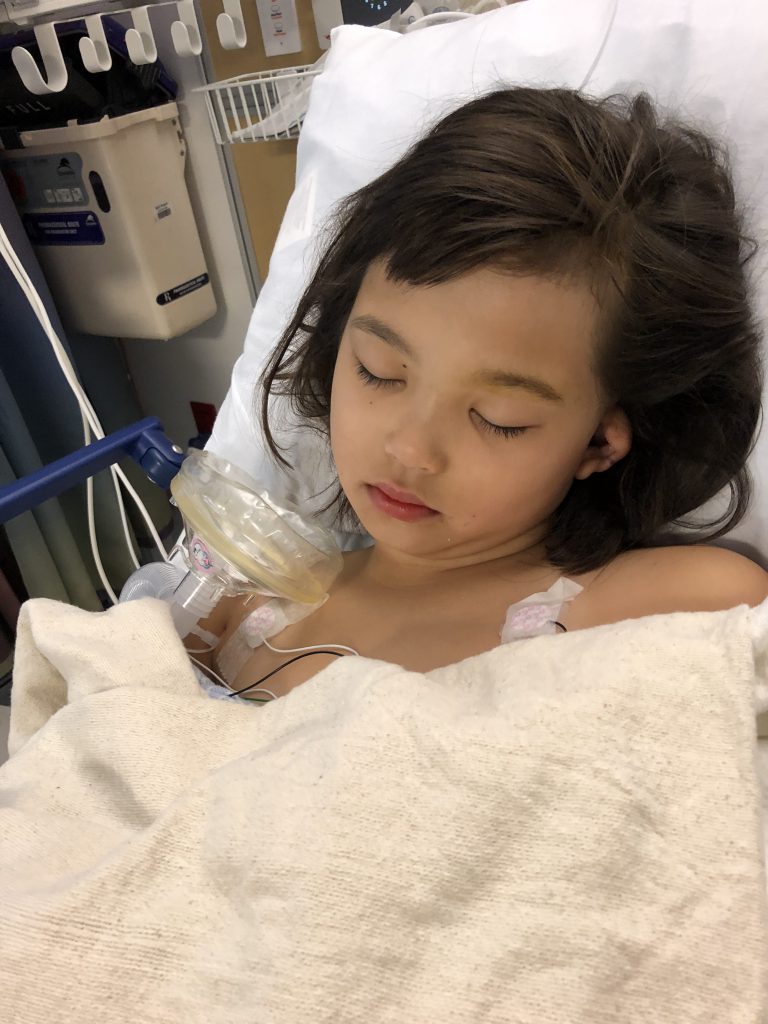 It took Matilda awhile to wake up since she was put down heavily for a 10+ hours surgery. She was very confused as to why she was not staying in the hospital for 5 nights. We told her what happened and she was a bit confused and somehow she was more disappointed that she can’t have the option to have an abutment placed under her scalp to attach her hearing aid. When we told Milo about the tumor, he quickly asked if that’s the same tumor that killed Peter Quill’s mom in the Guardian of the Galaxy’s movie; we assured him that is not the same tumor and he was so relieved. Then he followed by saying how even more special Matilda is and how more similar they are with both their medical conditions.

We were able to cut in line and saw the specialist in September and he informed us that he had never seen a case like Matilda in his many years of practice. He searched all over the medical world and was not able to locate an article where microtia and facial nerve schwannoma occurred at the same time. Matilda is a very special and rare case. (Of course she is, our family can’t have it any other way.) The specialist said even on older patients he does not do anything to their tumors unless it’s life threatening because there will always be facial never paralysis when he performs them. In summary, we will have to monitor the growth of Matilda’s tumor with routine MRI and we will also know when the tumor grows when we see facial deformities. 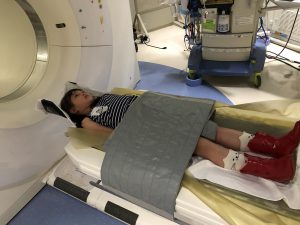 In the end we (including Matilda) decided to proceed with her reconstructive surgery after the surgeons and the specialist approve of it. Matilda will be going under part one of the surgery this week. She has to stay in the hospital for 5 nights since it’s a lot of pain management and making sure her new skin will not be infected. I joked with her surgeons that I hope there will be no surprises during the surgery; they told me they did not booked anyone else for that reason because we are a rare family with rare conditions. I laughed but they did not so much.

I am often asked how I feel about all of this new information. I have to say that I am okay with them. I think it’s because we are so well trained by Milo. I feel like this is our norm. But of course, it sucks a lot. I can only protect them so much and prepare them so much but in the end they are the one facing their blindness and their facial never paralysis (and possibly something else). It breaks my heart to think about it because I know at some point in their life, they will wish they don’t have it and they will wonder why is it her/him. I know they will feel insecure and mocked. Unfortunately it will get more cruel as they get older when they have to deal with all the social peers. My husband and I can only teach, prepare and embrace their differences as much as we can but in the end, it is them to have to decide how to present themselves. 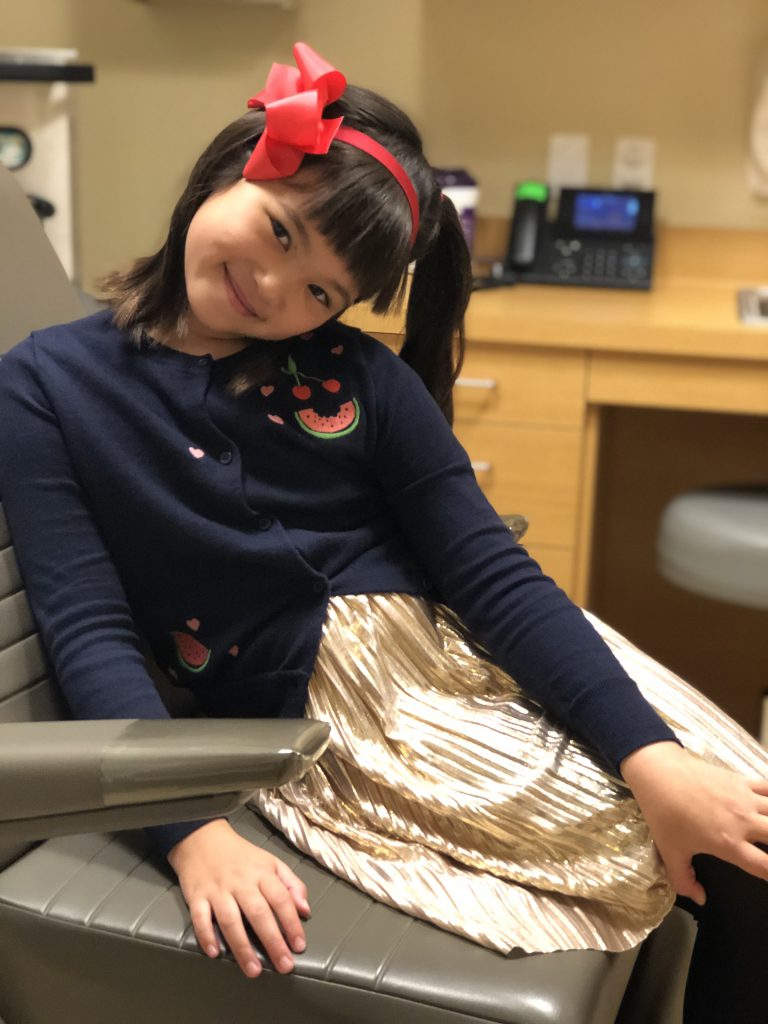 Parenting is SO hard. I believe that all parents wish they can take their kids’ pains away whether they are sick, feeling sad, or being mocked because all we want for our kids is to be happy, confident and be proud of who they are. Life does suck; but at the same time we are so lucky to live in the area where we have the top specialists for both my kids’ disabilities. The medical world finds us fascinating when they ask for medical history because we have kids with two completely unrelated conditions and they are such rare ones too. I have an amazing husband whom I am so lucky to have through all this. We are building an amazing community of friends from Matilda’s school. I am trying hard to reach out to more and more people who are like us who I can support and help as much as I have learned from both my kids. 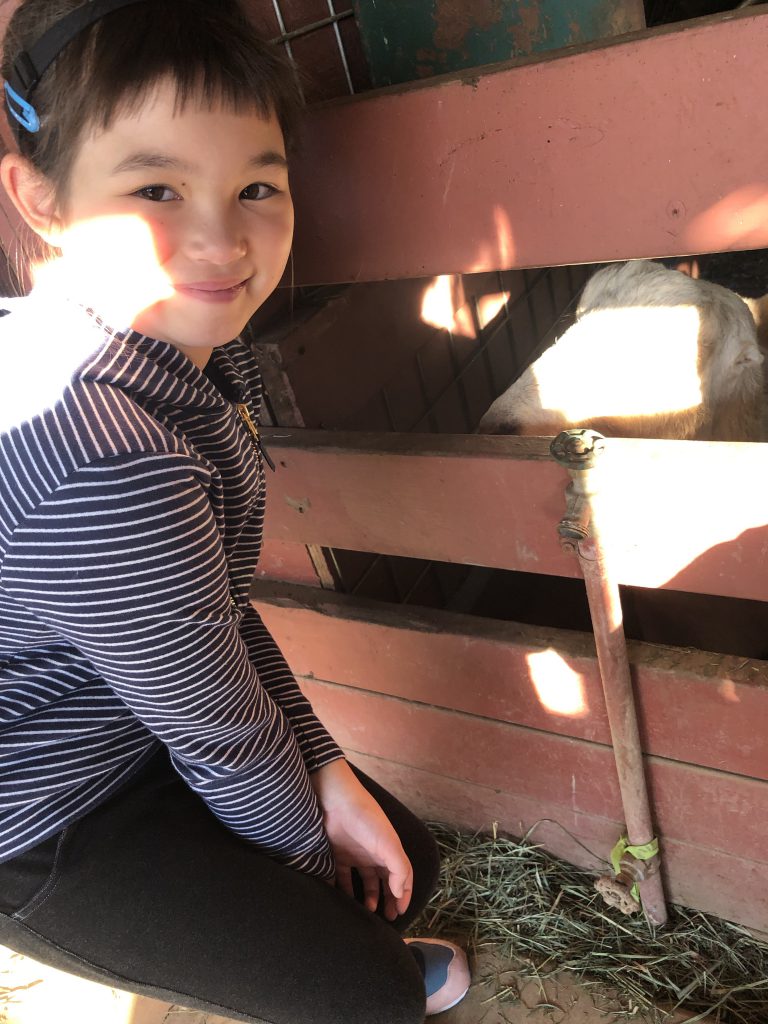 This is her favorite goat because it has little ears like hers.

P.S. We need to body scan our youngest since he has nothing (yet) or as we say, he’s the weird one in the family. 😉

P.P.S Thank you to those who have reached out to us with well wishes.